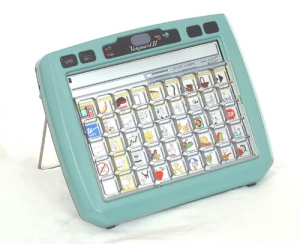 Joseph is ayoung man who has uses a vanguard that he received in 2011.

Joseph previously used a PODD book that was transposed into a Dynavox entailing many hours of work but unfortunately this did not provide the option of spelling or sentence writing.

He now generates language with the Unity 60 sequenced MAP, and uses a combination of Minspeak (icon sequences) and spelling to say whatever he wants to say. Joseph’s mum, Marion, says “Since starting to use the device, his reading level jumped from level 8 in May 2011 to level 13 (October 2011)... I can only attribute it to having a system that has both text and symbol ... and has so much preprogrammed in it rather than being reliant on me keeping up with him.  School has also been singing its praises as he is now able to be left to do some of his work via Bluetooth and they are seeing his progress rather than aide-assisted work. We’re rather happy with it you might say!!”

In August 2012, Marion reported: “Joseph is making amazing progress with the device especially as his reading improves (& using the Vanguard improves his literacy so it’s a lovely cycle).  His spontaneous conversation is happening with regularity...and sentences are being constructed with correct grammar and punctuation most times!!”

And in September 2012: “He seems to use Notebooks to keep news items that he wants to share with others, but also spends time collecting information or writing stories in Notebooks, which then end up somewhat epic to listen to! Most of the Notebooks are completely his own work (including sentence structure and spelling) with only occasional words where he has asked for assistance with spelling.” Here are some examples of Joseph’s writing from his Notebooks, which he has very generously agreed to share with us:

“Dear Sue, this is my Vanguard. I love working on my Vanguard.  I love notebook. I use it in school and church and with my cousins. From Joseph. PS My Mum had the idea.”

“I watched the famous five from the 1970s or the 1980s with my friend Sarah. Famous Five is a set of books. I have 1 and 2. I love Famous Five books. My favourite creature is Julian. The author is Enid Blyton. Daniel loves Timmy the dog. My Mum reads it to me. It is exciting and scary.”

“Fish are a rainbow of colours. Many fish live together in schools.  some fish eat coral. Some people think fish are for eating. fish are safer large groups. a school mullet leap out of the water to escape a dolphin. fish is a under sea creature and also pets. you can draw a fish.”

“I'm going to Crazy Critters Workshop Tuesday with my Grandma. Dawn is running it. Dawn has baked other crazy teapots to show us. I'm very very very very excited. Everyone's crazy critter has to be cooked in a kiln. The old schoolhouse is an art gallery. I'm used to doing art with my Grandma.  Dawn has to set up. it costs $10. The making is going to happen in the old barn. it is accessible for wheelchairs. it is from 1:00PM to 3:00PM. Clay is brown. I have booked in to the workshop. The workshop is a clay workshop. It will take a couple of weeks to bake the clay. we did do go to two of the art gallerys.  Dawn is going to put a glaze paint on my mythical creature. My creature will be shiny. I have to wait and be patient. The body is brown and the tail is orange. My creature has a head.”

“I got a new lego place mat. I've got the pictures from a old lego catalog.”

“I'm going to get a copy of the new the Muppets movie on a dvd from Peter.”

Recently, Marion reported that when Joseph can’t locate or spell a particular word he wants to say, he has learned either to attempt to spell or to find a parallel or similar meaning word, or a combination of both, to communicate his intention, showing his developing strategic competence. However, his language is clearly progressing well, as evidenced by a recent incident when Joseph was being observed during a mealtime by his therapy team. Instead of becoming upset and uncooperative in this situation, Joseph used his Vanguard to say “I don’t like people watching me eat.” As you can see, Joseph is discovering the power of clear communication, which helps to diffuse situations that otherwise have the potential to be distressing.