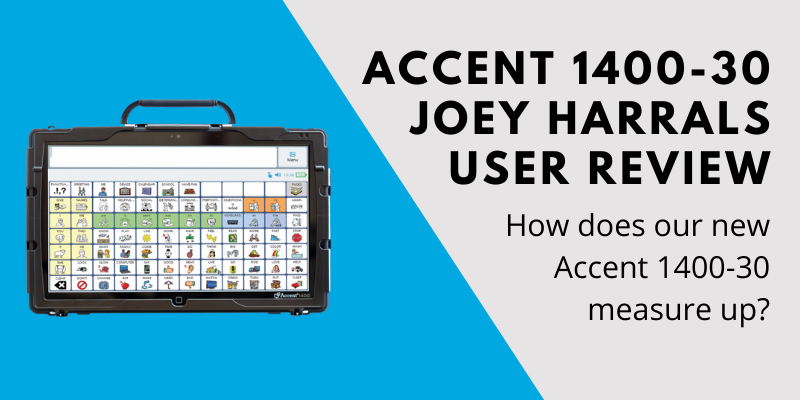 I firstly would like to say a big thank you to Liberator for letting me test the Accent 1400-30 for two weeks. Now this device did surprise me in a lot of different ways as I thought that they didn't change a lot but I was wrong.

Just to let you know, I am single switch user of Unity 144 Sequenced and have been using the Accent devices for around 10 years.

When I unboxed the new Accent 1400-30, it didn't look any different from my own device so I did some tests.  Well, I had no problem with doing my tests and it taught me a lot about what has changed with this new Accent. I'm not going to bore you with the technical terms because they aren't really used in the normal world.  I will use some examples below to tell you the new and awesome changes about the Accent 1400-30.

The first thing that I can say is the device has a lot more computing power for doing things like emailing, editing videos or photos and playing mid power games like Frostpunk at the lowest settings.  The second thing that I like about this device, the battery life is unbelievable.  I tested the battery on the highest brightness and it lasted me for around 14 hours which is awesome because I didn't need to ask somebody to plug this device in while I am spending time with my family before I go to bed.  It is also great in the sun with having the ability to turn up the brightness without worrying about the battery life running out.

The next thing that I like about this device is, the speakers sound pretty clear which is handy when you are talking to people and want to overcome background noise. The last thing I like about this Accent, I can class it as a laptop because it is a pretty powerful communication device and laptop all in one.  You can do pretty much anything on this fantastic computer / AAC device.  You might be thinking to yourself why Joey do I need a new communication device?  Mine still works great.  I understand you however I did some computing tests comparing the new Accent 1400-30 with my own older Accent 1400.  Let's say that mine did pretty bad in these tests.  Mine is slower at doing general tasks like doing emails, loading web pages and even booting up is slower on mine.  The new Accent 1400 30 can boot up within a minute which is pretty fantastic because you can say “Good Morning” faster and not miss the opportunity to greet other people.  If you are somebody like myself who stores a lot of big things on your device, the new Accent has 256GB of storage (that’s double compared to my current device).  I can edit photos on Photoshop easily compared to on my own device where I need to work off my USB which always crashes!  I had no crashes which was awesome on the new device!

Now, a couple of things I didn’t like. I love to play games on my device, and I think it could use a better video card for this purpose. Also, the self-facing camera could be higher quality for making video calls. Lastly, this model of the Accent has covers over all the ports which makes it splash resistant from all angles. But my brother found these annoying to move out of the way when plugging in the charger or a USB for me. But I can appreciate that some people might needs these to keep dust or moisture out of the ports.

My final thoughts about the new Accent 1400 30 are, this Accent really blew my mind by being a powerful computer and communication device.  PRC has really hit the mark with this device in unimaginable ways.  The sky is the limit with this one.  Once again, I would like to say an enormous thank you to both PRC and Liberator for letting me test this Accent 1400 -30. If you are looking for a communication device which can be used as a laptop too then I would highly suggest this device.

Other features about the new Accent 1400-30 include;