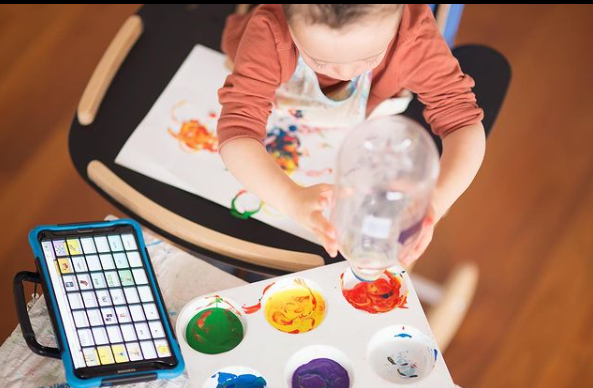 This post is an interview between WA Liberator Speech Pathologist Kelly Savage and a lovely Mum, Tracy, who has recently been trialling some communication devices with her son.

We hope to share some insights into what it’s like for a family to trial a device and some tips around all forms of communication. Thank you, Tracy, for taking the time to share your story with all of us.

Tracy, can you please tell me a little bit about you and your family?

My name is Tracy and I'm a mum of three. I've got a seven-year-old girl and two boys age five and three. Our youngest, his name is Elliot and he was born with Down Syndrome. And we've been on a journey with him of learning about communication through all his therapies. It's been very insightful and we've learned a lot along the way. We've taken it all on, I think, in an optimistic and a positive way and just looked at the different ways that we can communicate differently.

Can you tell me a bit about your keyword sign journey?

When we first started therapy with Elliot, we were introduced to key word sign. It's something that we both fell in love with. He started to learn the signs and I wanted to learn more for him to help him to grow and develop. I started with a basic workshop through Key Word Sign WA. I attended that when he was eight months old, I think. I continued to grow and learn new my signs with Elliot. Then in July 2019, KWS Australia offered a “Presenter Course” . I was a bit reluctant at first to apply for it, because I'm not a therapist or a teacher but I thought this is what I want to do. I want to try to learn more about signing so I can bring it to our community and teach others and support new parents.

I remember meeting you at that course, Tracy and your signing was better than most of the therapists in the room.

Thank you. I think because, being a mum, you have such a passion there, you just want to help your child. We just want to help them as much as we can to learn and grow. Our day starts very early and doesn't finish until quite late at night. So, we are signing the whole way through.

You recently also started trialling some communication devices with Elliot. Do you want to tell me a little bit about that?

Yeah, so, it was at the beginning of last year that we sat down with our speech therapist and thought he's going great with his key word sign but he can only communicate with sign if the communication partner knows the key word sign too. So as Elliot was stepping into starting school, he needed other modes of communication to be able to participate and join in group conversations. So, we started with just an iPad. We had two speech therapists come to the house and just show Elliot, show him the different icons and see how we felt. Initially, he was all in! He wanted to press all the buttons and have a go and listen to the words. So, we thought, great, we'll start a trial. So, we got our first trial. Then I think it sort of clicked to him that this is may be a bit of work. So then he pushed away from it. He didn't want to try the device. And so, we had to take a step back and bring the device in just with fun activities and meal times. And just do very small baby steps with it, we tried one icon at a time for example “food” “water” or “play”. We were always signing as well. Cause he's familiar with signs, he's comfortable with signs. When we're introducing something new to him, we don't want him to completely reject it so we have to do it in a fun way so he's engaged and wants to participate.

Then we moved onto the next device which was a Liberator one. It was a heavier set device. So, what worked well for him was it the icons were bigger but it was heavier (Elliot is only three). So, he's still quite small. He was okay sitting down with it at a table, but when we brought it out to a cafe to use, it was just too bulky. He couldn't even hold it over his shoulder with the shoulder strap. So, it just wasn't the device for him.

The next one we tried (Liberator Rugged 8), it was a better size, more manageable, but the key guard on it was a bit more restricted. And so, he couldn't actually put his fingers in to select the icon that he wanted. The other part that I found was when I wanted to edit, because we're constantly editing to add more things into his day, I had to remove the stick on keyguard. I realized how much that I have to edit throughout the day, that was a problem. So just in terms of Elliot’s dexterity at that point, he couldn't access the icons. And for myself, from an editing point of view, I found it a bit too difficult, so not for us.

And then the last one we tried (Nova Chat 8), so we trialled three devices over the space of about four months, and that seemed to be the winner for Elliot. And possibly it could have been just because he had four months of training and trialling and then by the time the last one came along; he had figured it out! He knew that he could obtain what he wants want in life, through pressing these buttons. But I also found the size worked for him. We liked the hard case because he gets frustrated and he might throw it. So, we have to have something that's very durable. On the Nova Chat 8, the icons were good and they key guard too; he could put his fingers into them and push the icons quite easily, and that keyguard lifts off nicely as well for programming.

As well, after four months of playing around with it, I understood more, about the device & how to use it. Having spent so long trialling voice-output AAC devices, they weren’t as foreign to me as in the beginning when I, like Elliot, initially wanted to push them away, as it all looked far too confusing.

So, if you were talking to other parents that are about to trial devices, would you have any advice for them?

Yeah, I would just say, just give it a go.

Don't put a lot of pressure on yourself to do it all at once. It's just like with key word sign, you just keep going with baby steps, just a little bit at a time.

Be persistent with it. Many times, I just wanted to throw it in the bin. I think it's good to maybe have a break from it for a day, put it away and then bring it back and slowly start working it into your daily life. Start bringing the device into things that you do every day, like mealtime and bedtime routines.

Take it out with you and just have fun with it when you're talking to family and friends. I just showed them how useful it is for us and for Elliot, that he has just an extra mode of communication. If he doesn't have a sign for a word, he might find the icon for it. So, he always uses the fastest and easiest mode of communication to get his point across.

I would just go with both modes, because key sign is his strongest form of communication. So, for example, even if Elliot, pressed “jump” he would still sign jump or he would still sign “food” despite pressing the icon. But then there were other times where his hands were just being used for something else during play and he would have this device next to him. So, he would opt to use the device over signing because that was the easiest way to communicate at that point.

That's so cool that he worked it out, that he could use different modes for different things.

Exactly, it was a learning process with both of us! But I really feel like he believes that he’s got all these different modes of communication and he would just pull which one he wants to use at that time. And depending on who he’s speaking to as well. If he's talking to me or a therapist or family member, he will use sign, but, with someone else who doesn't know key word sign, he would often use the device.

That's great. And lastly, can you tell us a little bit about your Instagram page, which I know is helping a lot of parents and others to learn keyword sign and keep up to date?

We just started it at the beginning of this year. It’s called expressyourself_withelliot. It's pretty much just showing different ways that we can all express ourselves through different modes of communication. It's showing Elliot's communication journey and we're demonstrating bits of key word sign. It’s designed to helped new parents, teachers, therapists, family members, to join in on learning how we could all communicate differently with one another.

Thank you so much Tracy for your time and sharing with us about all things AAC!