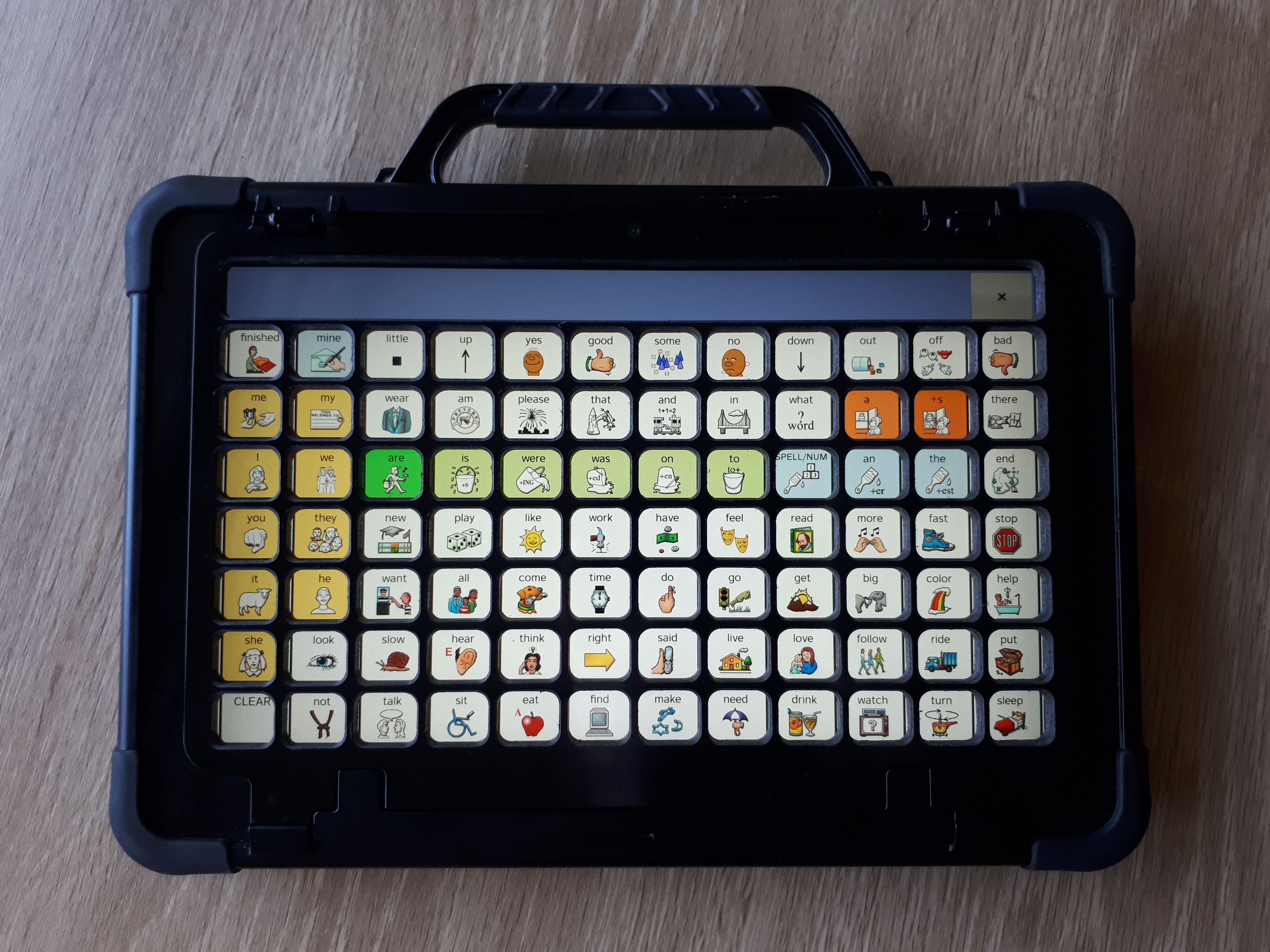 Kaylei is a 6 year old girl with Cri Du Chat syndrome, which impacts all aspects of her life including her speech and communication.

She communicates through some speech (1-2 word sentences, and difficult to be understood by those unfamiliar to her), key word sign, and more recently, her talker (Chat Fusion 10 with LAMP Words for Life). She is extremely social and has a lot to say, but can get frustrated when not heard or understood, so it is important she has effective communication methods.

It became very apparent when Kaylei started kinder in 2017 that she needed a more accessible way to communicate with those unfamiliar with her. This also coincided with a change in speech therapist. We had an assessment at ComTec, who recommended trialling high tech PODD and LAMP. I had gone into the meeting 100% PODD and knew next to nothing about LAMP. After the meeting I read up on both and programs and became really excited about what LAMP had to offer. We trialled both - Kaylei would push PODD away and wasn't interested at all. I became very familiar with Lamp via the Pass NuVoice software before the trial device arrived which allowed me to model effectively and a lot. Kaylei responded really positively and was able to independently navigate some pathways within the trial period.

We commenced the funding process, which coincided with our Ndis transition. It took us 7 months from our meeting at ComTec, to receive our own Chat Fusion 10 device, just in time for Kaylei's first day of Prep. In the meantime we purchased the LAMP Words for Life app and turned our iPad into a communication device. This allowed us to continue modelling the language, but Kaylei lost interest as the sound output was completely ineffective and access was difficult for her as she uses a keyguard on the Chat Fusion.

When we received the device, progress was slow. I began to wonder how long you use something before deciding to try something else. Then our speechie said something which made everything click for me: she is spending this time learning the layout of her new language, the placement of the icons, etc. I began modelling more and easing it into our routines, and almost immediately we noticed a change in Kaylei. She started using her device to communicate! She spent a long time exploring her language, mainly at the dinner table, and found her favourite words (excuse me!, haha, nutrigrain). She goes in waves of wanting to use the device a lot, to not being very interested, particularly as her speech has improved a lot over the past 12 months.

Her typically developing 2.5 year old brother loves to do what Kaylei does and the iPad talker has become his own talker. This is very motivating for Kaylei and makes modelling easier for me as I have two devices around, and no kids fighting! She is very clever and has worked out which environments her speech is the most accessible and successful form of communication (home) and which environments she has more success being understood with her talker (restaurants, loud, busy family gatherings). She is not using it entirely to communicate at this stage and we still have a long way to go, but with consistent modelling we have no doubt this is the right program for Kaylei and that she will become very proficient with it in her own time.

Having this program has been so fantastic for so many reasons. It gives Kaylei a voice around anyone, anywhere. People can read her message and hear her message. The language setup of LAMP makes it perfect for teaching literacy at school. It has all the words, and everything we need in the one place, meaning we don't need a device plus aided language displays plus Pecs folders, etc etc. I love the word finder function, and the fact all buttons remain in the same place, making motor planning so easy. It has potential for complex communication, meaning we have selected a program which will grow with Kaylei throughout her life. Although Kaylei has some speech and this is improving all the time, it is likely she will always require her talker around unfamiliar people to effectively communicate her message.

A lot of people thought going down this path would slow Kaylei's speech development, when in fact it has assisted her speech development. And even if it hadn't, at the end of the day it is more important to me that Kaylei can communicate her thoughts when, where, and to whom she wants, and the method she does that, whether it is through voice, sign, or a speech generating device, doesn't actually matter. All that matters is that she can say it.